People are So Dumb - Starbucks war on XMas

I read and listen to a lot of news.  I think I am going to start a regular blog post called "People are so Dumb"  Mostly because, well people really are dumb and need to find something constructive to do with their lives other than bitch about shit that NO ONE GIVES A CRAP ABOUT!

The latest and seriously stupid gripe I can't believe that they actually wasted 5 minutes of news time for this morning is whether or not Starbucks has an all out war on Xmas because, Get this, they didn't decorate their coffee cups this year... 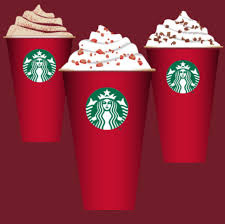 ARE YOU FUCKING KIDDING ME?  First of all, their coffee taste like warm shit strained piss and the only way to make it palatable is to add all of the crap, sugar and whatever else they have on the table to it.  Second, you have to have a degree in ebonics to be able to order it.  Third, there are too many stupid people out there that will pay $5.00 for a cup of CRAPPY Coffee because it's the "cool place to be".

So the story is that some people believe that Starbucks has its panties in a knot and are not showing their love for Xmas this year because of the plain red cups with their normal logo.  These freaking morons, need to be wearing tinfoil hats so that we can distinguish who among us is an idiot.

I just do not understand why or how anyone in the world would come up with no xmas design on a cup means that a company is against a specific holiday?  Are people really that self absorbed and egotistical that they would not think, Hey, maybe jewish people don't like xmas shit on their cups, or maybe the bone shakers have a problem with xmas decorations on their cups? 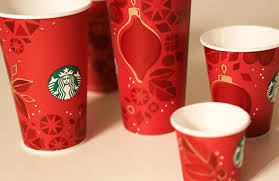 Why is it that the Christians/Catholics are always so one sided?  Don't we live in a world with many religions/societies/people?  Why must we cater to one or the other and then be called bias if we do?  Is this what the TRUE meaning of Xmas is all about??

As far as I'm concerned no matter what cup you put that nasty burnt shit tasting brew in, it's always going to taste like steamed shit!  As for an all out war on Xmas, really people?  The stupid cup is STILL red and the stupid LOGO is still GREEN (which btw is a PAGAN Goddess) there is your STUPID Xmas decoration!

And on a side note...WAWA makes the BEST coffee ever, only second to my Hubby who really is the Sensei of Coffee in the great northeast...