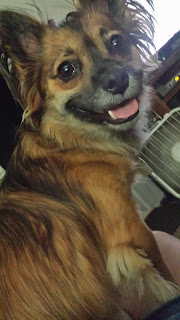 This here is FU.  We have had FU for a little over a year now.  FU comes from Kentucky and Tom's brother.  Because of circumstances, Tom's brother could not care or keep FU any longer.  So one weekend last October 2014, we did a marathon run to Kentucky and picked him up and brought him home.

Really he is the sweetest little guy you ever want to meet.  He is part pomeranian and we have no clue what else.  Although he is only 18lbs wet, he seems to think he is as big as a wolf!  He and Reilly are inseparable bestest buddies ever. 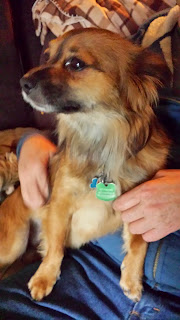 FU had a rough start in life being that he was tossed from a moving vehicle at about 10 weeks old.  He had multiple contusions, gashes, possibly a fracture in his left hip and snout.  However Tom's brother happened to be outside not long after it happened and found the little guy mostly unable to walk.  He nursed FU back to health over the next few months.

To this day FU sometimes walks with a limp, usually when its cold or rainy and he has a big scar on his side under his fur and a bump on his nose.  But we don't care, we love him anyway!

FU loves to play with his squeaky toys, usually anything that Reilly finds an interest in, FU will want it. He has a larger than live attitude and lets you know it!  He is a barker and whiner, and there are a few people/dogs that he just DOES NOT LIKE.  However he is a master birder and loves to chase the squirrels out of the yard.

This is our FU
2 year old Pomeranian mix, best bud to Reilly....