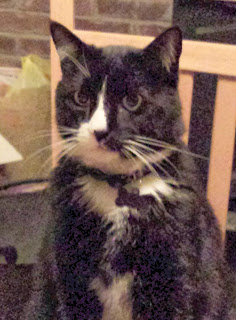 This here is my boy Fredrick, named after the one and only Fred Astaire!  Freddy came to us in the winter of 2010.  It was a brutal winter, I lived in Matawan, NJ in an half of a house on this dead end road.  There was a colony of cats that lived near this factory at the end of the road, where the workers there would feed the cats and kittens in return for them keeping the property rodent free.

A few times that winter we got well over 2 foot of snow.  I didn't leave my house for days but you would look outside and you would see Fred hanging out in the street, all scruffy and skinny looking.  We honestly thought that he was someone's cat because he was so friendly, would walk right up to you and let you pet him.  I found out one day that he was just a stray, and had no real place to live.  So we decided to take Fred in and give him a home. 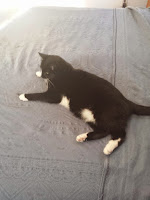 Well Fred went from being an average sized cat of about 5 to 8 lbs to a monster of a kitty weighing in at 18.5 lbs.  He has a heck of an appetite!  The thing with Fred is that because he was almost feral and lived off the land for at least a year, he would catch and eat rodents and bugs.  But because of this, when we took him in and started to give him dry cat food, he ended up with his little kidneys packed with crystals and was hospitalized for a few days to flush him out.

Its seems that a semi feral cat gets their liquid intake from the rodents and bugs that they eat and that is enough to sustain them.  However when you take one of those cats into your home and give him dry food, he doesn't drink enough water to flush himself out and so, gets the crystals.  So now, Fred gets extra water in his canned food and a dish of milk/water every morning.  (milk is NOT harmful to cats when you dilute it).  He also eats about 2 6oz cans of food a day. 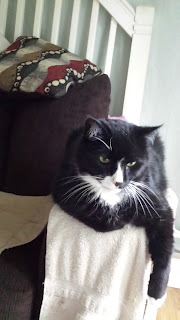 We do love our Fat Freddy though, he was very shy at first but he came around in short order.  As a matter of fact, he and Reilly are very good friends.  Fred also things he is a dog.  He goes out with the dogs, comes in with the dogs.  He even poops in the yard with the dogs!  And he is bigger than my smallest dog Fu!

Anyway you take him, you have to love Fat Fred, he is a treasure in black and white fur!
Posted by The Jaded Mage at 10:00:00 AM