Brussels and the war on Terror

I would like to say that there have not been any more terror attacks on innocent people since the atrocities that happened in Paris a few months back but as I am sure you must already know by the time this is posted what happened last week.

I would like to say how sad I am for the people of Brussels and how my heart and thoughts go out to all involved and who live there.

I am not going to delve into the seriously disturbed acts one human being can perpetrate against another, as we see this every night on the news.  What I want to discuss is how these people, the ones that carry out these acts are essentially being hidden by the ones that call themselves "peaceful" Muslims.

Recently, I read a news story saying that one of the people that was involved in the Paris attacks was hold up in Brussels, being hidden in an area where the police deemed "no go zone".  Why?  because this area was where the "peaceful" Muslims lived and worshiped so in fairness to people that say they would never do such awful things they regarded this area as OK.  Or at least until they had to arrest this guy in their area.  It is now what the police believe to be the event that ticked off this latest attach in Brussels.

I am all about Freedoms, freedom of speech, religion, whatever have you.  And I have never thought before that all Muslims were indeed like this.  But I am beginning to look at my own beliefs now.

Just like how the Catholics hid their pedophile priests for decades without a care for the children they where hurting by just moving them from one place to another.  These so called peaceful Muslims are just as much to blame for these terror attacks as the people doing them.

The church is just as guilty as the priests, just as the Muslims are just as guilty for hiding these animals from the law.  I did not always think this way but time and time again I have seen or read that the terrorist that have gotten away from some of these attacks are being held up in the communities of the people that claim they are not like the terrorists!

You can not have it both ways.  You can not say how great and peaceful your choice of religion is and then condone the horrible acts of people that claim they are practicing your religion!

Muslim people, if they are truly serious about NOT being like these terrorist need to step up and start to hand over these terrorist when they hide out in their communities, they need to speak up when they hear one of them is planning on bombing something or causing harm to people.  They need to get their house in order and be part of a greater community of people of the world and get rid of these terrorist among them.  They are the key to ending this, but will they do what is necessary?

I hate to say this but this is just one more reason that I do not and will not ever believe in an omnipotent being. I believe that religion and the pursuit of divine knowledge will what will eventually lead to the end of life as we know it.

Wishing Everyone a wonderful Easter and Happy Spring! 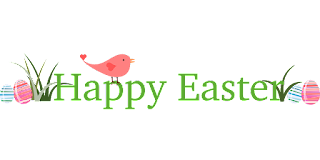 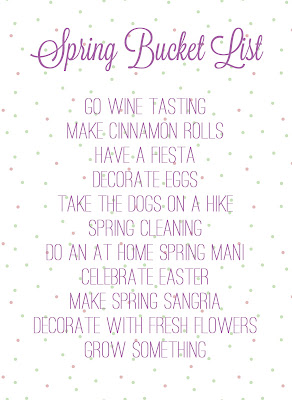 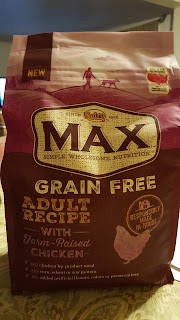 I was lucky enough recently to get this free sample bag of Nutro Max, Grain Free Adult Dog Food and product review from the Website BzzAgent.  You can find a link to it if you would like to join in at the side of my page.  they do give away some great stuff in return for Product Reviews.

So my boys are itchy all the time.  I thought it was because they were just dirty since they enjoy rolling in the dirt all the time.  Typical boy dogs!  But I have come to find out, that it seems that they may have an allergy to wheat?  I think that this may come on the heels of the Gluten free revolution but hey, it's worth a try right?

My boys are like my kids and I wouldn't want them to be all itchy.  I did recently change their food to that Rachael Ray Brand, simple 6 and they seemed to be doing ok with that.  When I got this sample, I started to give it to them, they are basically the same thing (i know because I read both packages) and they even look like the same product. 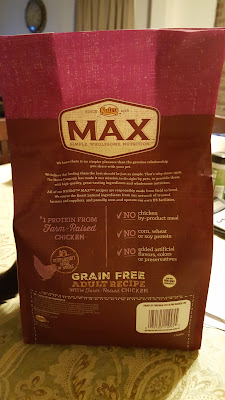 The Boys seemed to have liked it well enough.  I know you probably can't read the ingredients but there isnt alot in there and it's pretty high in protein and crude fat to be actually good for them.


I have to add that even my cats like this stuff, and let me tell you how picky THEY are!

All in all, I give it 4 Puppy Paws, It's a great product, the dogs like it but it's a bit on the expensive side especially if you have a big dog! 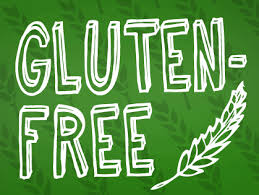 So what is gluten and why should I be Gluten Free?

According to the Mayo Clinic, Gluten is described as follows:

"Gluten is found in grains such as wheat, barley, rye, and a cross between wheat and rye called triticale."

First of all you should understand that a gluten free diet was invented to treat Celiacs disease.  Only about 1 % of the population actually has celiacs disease and it can only truly be diagnosed with an intestinal biopsy.

Most people these days choose a Gluten Free lifestyle because they feel tired, bloated or depressed and find that removing gluten not only helps them lose weight but also alleviates the symptoms they were having.  The truth may lay in the fact that removing gluten (ie, bread, pasta, anything with wheat or wheat flour, the list is extensive) from their diets also eliminates extra calories and so they lose some weight. But either way most people seem to feel better following this GF lifestyle.

The basics of living gluten free are to eat only:


You can also eat the following:
There are also whole aisles dedicated to Gluten Free alternatives at your local grocer these days with premade boxes of cake mixes, baking goods, side dishes, and just about anything else you can think of.

I have found, although I am not completely gluten free, it does help keeping calories and sugar down and a lot of the premade stuff isn't really that bad tasting.  Since having the WLS I do not really eat bread all the time, I do on occasion, but I try to stay away from it since it fills me up quickly and doesnt leave much room for anything else.  So Gluten free is an option.

I would have to say that before you try any of this you should check in with your doctor first to make sure it's right for you. 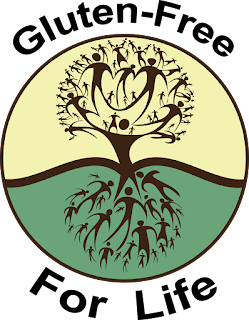 Top O'da Mornin To Ya! 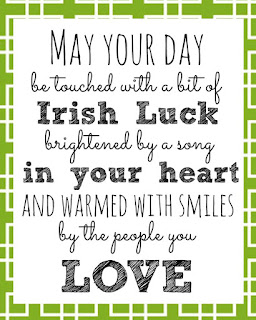 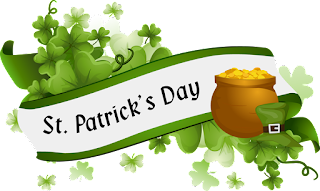 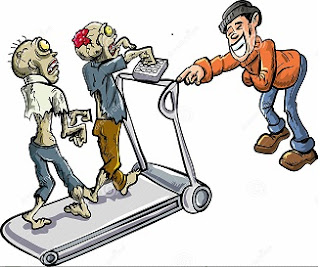 Right before the holidays last year I joined a gym.  It was my very first endeavor in doing so.

I figured that I was stuck in a rut and had not lost anymore weight in a month or so (at that point) So I figured I would join that "NO Judgement Zone" place you see in the commercials all the time.  It was pretty cheap so I figured no harm no foul.  Besides I could not and would not do any outside walking during the cold winter months so I needed to make sure, if I was not losing, I was not gaining either.

It was pretty nice when I first started going.  There were people there, mostly middle aged like myself.  No one really talks to one another there though.  I figured that I would just get on a treadmill and walk for an hour and that should be good enough.  But after a while that got boring, so I took a class to learn the 30 minute circuit.

All through the holidays I was pretty happy at the "no judgement zone" there were people there but not enough to irritate the crap out of me which is what eventually happened.  I would go there after work and do my 20 minutes on the treadmill and then the 30 minute circuit, just as the instructor showed me.

Then it happened, I got there after work one day and looked through the window and it was like two rows of walking dead people on the treadmills, the place was filled to the rim with people.  All the treadmills were being used so I figured I would go do the 30 minute circuit instead...WRONG!

So we go from zombies on treadmills to assholes in the 30 minute circuit.  I go in the room and start doing what you are supposed to do in that room, and Bam, some idiot just strolls in and sits down on one of the machines, of course, it would be the one that I was going to use next.  Then there are the times when a few girls use the back corner machine as a place to sit, hangout and text their boyfriends on the other side of the gym.  Then you have the people that stroll on in and put 700lbs on a machine to do 2 reps because they want a six pack and have not a clue how to get one.  Then you have the ones that had to go out and purchase a special outfit just to wear to the gym, whose hair and makeup is always perfect and they wouldn't be caught dead breaking a sweat!  Then you have the ones that think the 30 minute circuit room is their personal meeting room.  OMG this list can go on.

The thing that really irritates me is that they ALL SEE there are people there doing what you are supposed to be doing in that room and they could give a rats ass if they jump onto the machine you were just about ready to use.  I did complain a number of times, and you would think that they would monitor the rooms a little better, since you know they are standing up at the counter talking with their friends or texting people while they are at work.  But that never happened.

Well luckily for me, the weather in the great northeast has broken this week.  I can tell you that is true because I have been sneezing and my eyes have been burning for days now.  I will soon be going on my walks again a few times a week and will not have to deal with that "no judgement zone" morons any longer. 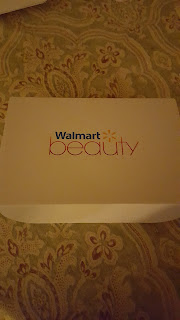 I recently was able to get into Walmart's Beauty Box.  For a while it was closed to any new participants but it is up and running again, and for $5, 4 times a year you too can get a beauty box.


Here is the Link to get yours!
Wallys Beauty Box

It's actually kind of nice and they have lots of different samples in the box.  I was hoping for some nail polish or something like that but I was liking what I got. 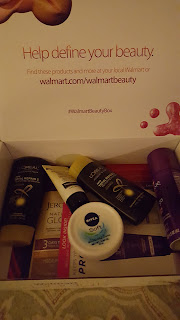 So they have 4 boxes a year, each corresponds with whatever season is coming up, to this box is for the spring.

There are about 10 samples in a box, all of them are trial sizes or just regular samples.

I give this Sample Box a 4 out of 5 puppy paws!