One thing that really irritates the crap out of me is when people LIE for no good reason.  Boldfaced Blatant Lies, SUCK. They also tend to ruin or undermine the relationship of the person they are told to.  Which is why they irritate the crap out of me.

I know what you are thinking, Really? Is there a GOOD reason to lie?  Well no, not really but let's face it, everyone lies in one way or another on a daily basis, whether its for self preservation, or the error of omission, most people will not be 100% truthful all of the time.  Im sure you have heard the saying, "little white lie".  BUT there are a certain group of people that just lie for the sake of lying.  Maybe it's because they don't like their lives and want to exaggerate, or they want to control a response from someone they are talking to, or they can just be flat out gossip mongers and are looking for some excitement in their everyday boring lives.

Let's take a look at some of these lying bastards...


Gossip Mongers are probably the worst of the worst.  They make up stories, usually really bad ones and pass them onto unsuspecting people.  Of course if you have no malice in your mind, more than likely the rumor spreading will end with you. (It should anyway)  But the problem with that is that people LOVE dirty laundry and they love to be the ones that have the dirty laundry to spread.  Usually the gossip monger is bored with their lives and just want to add a little spark to keep things interesting.  But sometimes, the damage they can do can be unrepairable to people.  So don't be a gossip monger, find a different hobby, and don't be a wash person either...


The Sin of Omission, another really irritating liar.  This liar thinks that they did not lie because they did not tell you an untruth...WRONG bozo, just because you didn't come out and SAY it doesnt me that you didn't LIE!  By conscientiously omitting facts, you are not telling the whole story there for you are LYING.  These people usually tend to be petty and have low self image.

Self Preservation, is when you lie not only to someone else, but also yourself. Some people have the balls to actually BELIEVE what they are saying.  This other than all the rest, does some serious damage to a relationship because you are usually lying to someone you care about in some way shape or form.  Normally this type of lying is done by children when they want to get something out of their parents.  However, I have seen that it's not just children that will lie for self preservation, it's usually done by immature adults too.  Self preservation also comes in the form of a "little white lie" which is anything but little and or white!  Usually people call it that when they want to downplay the seriousness of their compulsive lying problem!


So in ending, my point is..Don't lie or at the very least TRY not to lie (we are all human and sometimes the devil gets ahold of ya).  Don't even let a "little white lie" slip because in the end, you are only hurting your own credibility.  If faced with a question that you just do not want to answer, say it.  Say, "hey, i'm not comfortable answering that", or "can we change the subject, I don't want to talk now."  It's ok to not have all the answers or just not want to deal with something at the moment but for crying out loud, the only person you hurt with your lies is inevitably, yourself! 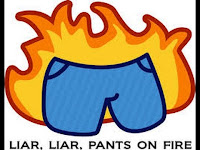