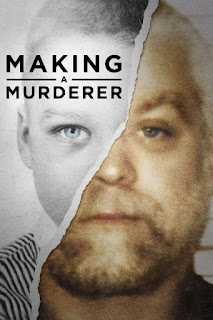 If you do not live under a rock these days or are totally oblivious to what is going on around you, you will have seen, heard or read about the recently released Netflix mini-docuseries called "Making a Murderer".   It is the story of Steven Avery and Brendan Dassey who are currently incarcerated for life being found guilty charges of Rape and murder of Teresa Halback.

While I have been more or less consumed but this series and just about every article, interview and social outlet I could find, I find it very interesting that most people tend to argue whether or not these two people are guilty of these crimes rather than being infuriated at the system who put them behind bar and the glaringly obvious mishandling of an investigation.

This series was released on Netflix on Dec 18th 2015 and has gained momentum over the last month, people petitioning for Steven and Brendan's release or new trial, heated debates over the veracity of the evidence in the film and most importantly the handling of case from the very day this woman went missing.

I believe that the world was ripe for this film to be released when it was, with people becoming more and more aware of police brutality and innocent (or presumed innocent) people being killed by police, the timing couldn't be better.  I'm not saying that the feelings of the average american negate the fact that this series does stand on its own, but I think that with the lack of moral conscience that some police show towards citizens, it just adds fuel to this already hot fire.  I am not in anyway saying that all police are bad.  I have always been an advocate that they should all go through proper vetting and that many have an already established mental or emotional problem that leaves them easy targets for becoming corrupt or just are not right for the job.  I will also say this, there are some police in this country that are heroes and make this world a better place just for being in it and always doing the right thing.  Its unfortunate though, that most fall between these two groups and it is even sadder that we do not hear or see on the news some of the outstanding things that police do every day.  With great power comes great responsibility.  We instead see the corrupt or bad ones and so our opinions of them are sometimes stale and misguided.  But I digress....

While people debate over if these guys are innocent or guilty, I do not believe that was the true point of this series.  Our judicial system is flawed, seriously flawed.  This series puts that out there like a neon light atop the empire state building! However I do not think for a second that it was entirely the police's fault of what transpired.  Corruption ran rampant in that town and people will do anything or say anything for their pound of flesh, even if it turns out to be the wrong flesh.  Absolute power corrupts absolutely and that town was not lacking in absolute corruption.

There are a few things that you should take away from this series, other than your opinion on whether or not they are guilty.  First is, in some places in this country, no matter how much you do not want to believe it, there is collusion and corruption among police, lawyers, judges and elected officials.   Second, when these cases are in the news and sensationalized, we can not pass judgement based on what we see exclusively on the news or in the news papers.  These people sometimes get it wrong, and in saying that, how could anyone in this country get a fair trial if people have already made up their minds?  The third thing and this is actually pretty scary, if you find yourself being accused of a horrible crime like these two were, without money, and a lot of it, you should probably just resign yourself to the fact that you are going to jail, whether or not you are guilty of the crime.  Money talks in cases like these.
The fourth thing and probably the most scariest of them all is, if this can happen to Steven Avery, twice, it can happen to you!