I have been thinking about all the hubbub lately about the United States taking in 10,000 Syrian refugees.  The majority of them would be women and children.
There are many people that believe this would be opening the front door to invite terrorists into our country.   I find it hard to understand why these people have so much hate towards citizens of a country that have done nothing to them.

Granted, I did see on the news this morning that about 70 people have been arrested in the United States over the last year in connection to terrorists plots and sympathisers, who are mostly, by the way, US citizens or permanent residents.  (information taken from the article below)

We, as citizens of this great county, do not need any help with terrorism.  We grow our own, right here in the good ole US of A.  Recent case in point, Robert Dear, who just shot up an abortion clinic and strip mall out in Colorado Springs (isn't that where Det McKenna is from??)  Because of that stupid altered videotape that the Republican'ts (that's not a typo!)  run as their forum to "end abortions" with some morons (who are not the status quo) selling baby parts. But I digress...

Both sides of my family came from over the pond to the United States around world war II.  Both sides (or at least my mother's side, I know for sure) came in through Ellis Island.  Some were quarantined, vaccinated, indoctrinated, so why can't we do this for these Syrian refugees?  I don't think that we should just let them in without some kind of checking but I certainly don't think that we should turn them away.

Our country was built on the backs of immigrants.  The Statue of Liberty shines the light to our coast line with these words: 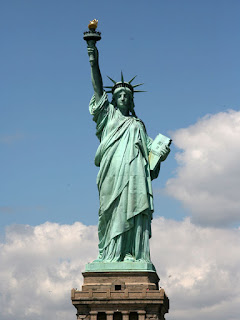 Give me your tired, your poor, Your huddled masses yearning to breathe free, The wretched refuse of your teeming shore. Send these, the homeless, tempest-tossed to me, I lift my lamp beside the golden door!

Who are we to turn our backs on people in need???