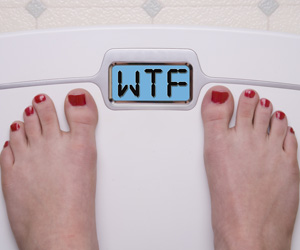 I stopped losing weight after about the a year/ year and a half after my surgery.  I believe that's pretty common place with surgeries like this.  It's estimated that most people do lose about 70% of their excess weight during the first year or so after the surgery.

The surgeon did say that I would not lose all of the weight I wanted and would have to work at the remainder.  I just never really realized how hard that would be.   I also believe that my age, menopause and a history of over dieting doesnt help my situation any.

When you are younger, lets say under 30, it's really easy to lose weight as long as you eat right, get some exercise and pay attention to what you are putting in your mouth.  After 30 and into your 40s, your body begins to change.  Your hormones change and that does affect the way you lose weight.  If you are overweight in your 30's and 40's most of the time you start to acquire problems like diabetes, high blood pressure and cholesterol.

Diabetes is a bitch.  Not only do the meds make it hard to lose weight but the fact that your body is not metabolizing the sugar in your blood correctly makes it even harder to lose any weight let alone enough to actually make a difference in your diabetes.  It is literally a vicious circle.  And along with Diabetes, you get a host of other rotten little problems that go along with it, restless sleep, pins and needles in your legs and feet, mood swings...Oh it's just wonderful!

I assumed that once I lost the weight, It would never come back.  Boy was I wrong, not only did I never get to the weight that I really wanted to be but I gained back about 20lbs!

And now, I am back to my struggling to lose an ounce!  However, I do have one thing that I did not have before and that is my 8oz stomach.  I currently limit myself to about 1000 calories a day.  As I was originally losing the weight I had no more than 1200 calories a day.  I dropped my intake down to 1000 and very low carb, low fat and I am still having problems losing any weight.

That's when it dawned on me.  Im old!  HaHa No Seriously, It's my age and the breakdown in hormones, one specifically called Cortisol, that seem to diminish was we age and is especially true for women that are in menopause.

I have been doing some reading and I read that DHEA can deplete as we go into menopause and we can get what is called Adrenal Imbalance, which is one of the reasons it's so very hard to lose any weight.  I think I'm going to try it.  They sell it over the counter but there is science that backs up its claims.

At this point I'm running out of options, all I want to lose is the damn 20 pounds I gained back!

Ill let you know how this turns out...right now I am hopeful! 😁