Well Hello there all you people out there in the blogosphere or Blog Space or whoever the over 10000+ people that have visited my blog so far!

First, I must say thank you all for caring or just looking for a good laugh or maybe you are getting something out of my crazy rants.

I did take a hiatus for a few months after I turned the big 5-Oh.  Mostly to reassess myself and exactly what I want to do with the rest of my life. (which I still have not figured out!)  During that time I did lots of stuff around my house,  and went on a real vacation to Jamaica with my love of my life Tom (which I will talk about at a later time). 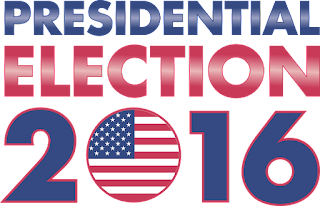 And now I'm back, and boy do we have a SHIT STORM a brewin with this Election next month!

I just can't believe how completely INSANE people are over this election and the absolute dedication to Donald J Trump.  That man could dissect and eat a live puppy on stage and the crowds would back him even more.  I used to be very into politics, and I guess I probably still am but I am totally DONE talking about it on Social media...Done I tell you!

Arguing over politics is, in its own way, pretty stupid.  You will never ever ever make people see things your way, that they just do not want to see.  Everyone has their own ideals and morals and have come to them by way of their own lives.  What is right and just for 1 person, may not be for someone else.

So let people have their opinion...You may not like it, but it is what it is.

Politicians do not care if you are such a supporter that you will say stupid things in public and loose otherwise decent friends because of your support. Politicians DO NOT care about YOU, not now not ever. Not Hillary or Trump, they do not care about you! Now that's not saying that they can't, in some way, affect your life, because they can.  But they do not care that you are dumb enough to cause fights and say hurtful things to each other because YOU want your pony to win the race!  So why bother?  Is making enemies really what you want to do?

A few years back, shockingly, I found out that a big part of my family had very contrasting views of politics than I had.  We argued, we fought and we said some very hurtful things to each other.  I regret that.  Why? Because first and foremost we are family for better or worst.  I still talk to most of them, but it's just not the same anymore.  Was it worth it?  Absolutely Not (even if they are bat shit crazy! seriously I joke).

So this year, I have decided to make fun of the candidates, both of them, as much as I can.  Sure, I think that anyone that knows me knows I lean more towards the left of center than the right but Stranger things have had happened!  But until the day that I vote, I'm poking fun at all the politicians, because I do not intend on losing real friends over this election.

So when November 8th rolls around and I step inside that voting machine, It will be just me, myself and I that know who I am really voting for.

Get out and Rock that VOTE this year!