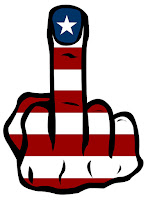 You really screwed the pooch on this one!

For a long time, with the infiltration of the crazy tea-baggers, I had thought it would be the Republican party that implodes on itself.

In the words of our President Elect...WRONG!!

WTF were you thinking?  You had a ROCK STAR in Bernie Sanders and you told him to go sit down!

I am so very disappointed in you.  While I have flipped back and forth between both parties for most of my adult life, finally settling on Independent, only to find out I couldn't vote in the primaries, I came back to the Democratic party. Here I thought we had an understanding, that we believed in mostly the same things, i.e: a hand up, peace not war, live and let live, working class families, equality for everyone....

I would have never in a million years, thought you would turn on us like this.
You had this in the bag, you had your shining candidate, the people were screaming at you and YOU ignored us!

You have looked us, the people that believed in you over for big money endorsements.  You are no better than a sports figure selling their souls for a puma or nike endorsement.  You Suck!

A word of advice, don't listen to polls!  Everyone lies, you should already know this but you let your guard down when you thought you had it in the bag.

I really think you need to go back to the drawing table and reinvent yourself. Seriously, you have two years to dig your heels in, pull your big boy pants up and decide what you are going to do to fix this giant fucking mess that is going to be the Trump presidency.

I'm sorry but I have completely lost my faith in the party that was for the working class people.  Where did you lose your way?  Where are the passionate people that fought for civil rights and equality?  Have they all been swallowed by wall street riches and the broken promises of riches beyond your wildest dreams?

You,Democratic Party, have really let us down.  I hope you have learned just a little from this giant disaster you created.