This is my boy Reilly.  He just turned 2 on September 30th.  I got him as a puppy from a charity that saves forgotten and abused animals in Puerto Rico, these dogs are called Satos. Right now there are about 100,000 of them covering the island and there are many efforts to try to save these dogs from fates worse than death, like a place they call, Dead Dog Beach. Another component of this Charity called  The Sato Project is education.  One of the biggest problems they have is that people do not spay or neuter their animals and they end up with puppies all over the place.  So they take them to 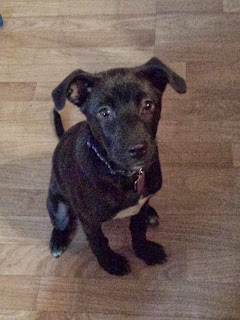 Dead Dog Beach where they become shooting targets for mean people or just starve to death or some of the older ones are just left in crates to die in the tropical heat.  Anyway, I saw this puppy and knew I couldn't leave without him!

He is pretty smart and really fast.  when he gets it in him, he gets real low to the ground and runs around the house balls out, its a sight to see.  Right now, since he is full grown he weighs about 45lbs.  Which is average for a Sato.  Not to big and not to small that's what I always say. He is loyal and loving beyond comprehension.  He also LOVES his squeaky ball and loves to play catch.  I think that he definitely has some lab, boxer and maybe even jack Russell terrier in him.  He is extremely agile and a very fast learner.  I got him a puzzle box and ball for Xmas last year (doesn't everyone get their animals presents for Xmas?) and I believe I showed him 1 time how to use them and he does it without hesitation now. 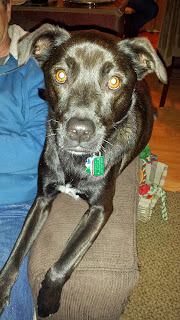 He also has a condition called "Idiopathic head tremor", which actually sounds a lot worse than it is.  It is when the animal's head shakes up and down or side to side.  Usually it lasts a few minutes and then stops as quickly as it begins.  It is more common in the Bully breeds of dogs, bulldog, pittys, labs and so on and it's also more predominant in mixed breed dogs.  There is really nothing that can be done about it, it does not effect them neurologically, its just sad to watch because you know it bothers them not being able to control it.  Think of it like when your leg gets the jimmies.  Its about the same thing.

So in ending, Reilly now lives the life of Reilly, he is loved and cared for and in return he gives us his unconditional loyalty and devotion.  I would say to anyone that reads this blog, to head on over to The Sato Project and make a donation or even inquire on how you too can own your very own Sato!
Posted by The Jaded Mage at 10:00:00 AM