Me Thinks Thou Protests Too Much 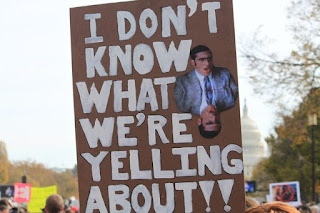 When I think of Protests, I think of the Vietnam war and the huge protests that happened in the 60's & 70s.  Or more famously in America the Boston Tea Party.  Our country is young but we have seen our share of Protests, Violence and Chaos when a group of people gather to assert their first amendment rights and free thought and expression.  Especially when counter-protesting groups have something to say too.

There have been many Protests that people came together peacefully to force a change and it actually worked.  The Seneca Falls Convention in 1894, led to the 19th amendment and the Right of Women to vote in 1920.  The Montgomery Bus Boycott in 1955, when Rosa Parks was arrested for failing to give up her seat to a white man.  After about a year a protesting, Montgomery Alabama integrated it bus system.  In 1963, when Martin Luther King and 200,000 people Marched on Washington and he gave his famous speech "I have a dream" lead to Lyndon Johnson signing the Civil Rights act of 1964.  There are many many more throughout our history that have culmanated in changing what was into what is. 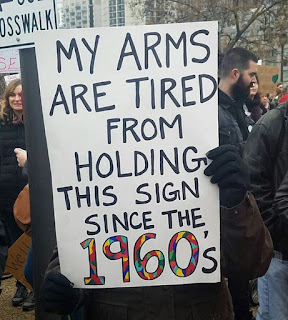 I believe that the idea behind what a protest is, is indeed genuine and thought of with good intentions for most people. However, as with many good intentions, someone is always bound to take things too far. Many groups these days I believe begin altruistic and eventually get taken over by people that's sole purpose is to physically fight with opposing groups.

Groups that started with a legitimate cause, such as BLM or Occupy Wall Street, who had a legitimate grievance to voice, it began very slowly and quietly, until every time they gathered, the Black Bloc would creep in and ruined whatever peaceful demonstrations they were having. We have all seen the videos of those black clad demonstrators, faces covered, woven between peaceful participants, then they go berserk and start smashing windows, cars, fences, barricades, whatever they have or can find.

So now we have violent groups to the far left, such as the Black Bloc and Antifa, that have fashioned themselves after the far right groups such as the KKK, Neo Nazis, Skinheads, White Supremacists or Nationalist.  Ready to incite violence whenever they can.  It's kind of hard to wrap your head around people whose core beliefs are liberal or socialist to want to incite violence but as I always say, the pendulum swings both ways.   Perhaps their ideas are a bit barbaric, perhaps they are mad for totally different things.  Whatever the case, it seems to me that people who join any of these groups, left or right are mad about something.  But being mad, doesnt make a bit of difference if you don't get out and Vote! 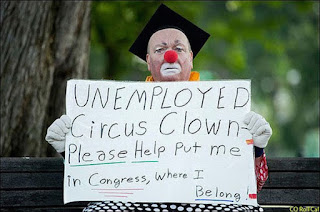 There are still the altruistic people stuck in the middle, which is who most people that go to these demonstrations are.  I think we all lose site of the fact that we all still have the right to speak out against our grievances and most people are not totally left, or totally right but sit somewhere in the middle, shaking our heads and fingers at both sides.  We all have an opinion, and are duly entitled to that opinion.  But we do not have a right to force our opinion on another person.  We can debate, argue, bicker or stew over our beliefs but it will always be wrong to use violence to get our point across.

Violence will never change anyones mind.  As a matter of fact you may just lose ground if you are violent or cause chaos.  Demonstrations or Protests are meant as a platform to bring people together under a common cause PEACEFULLY.  You do not have to agree with what the Protesters are saying, that's up to you, but to invoke violence in the name of Peace?  Are you fucking kidding me?  You just make yourself look dumb.

As far as joining these dumb groups, I will say this in ending. You were born into a group, it's called AMERICAN CITIZENS. For crying out loud, start acting like it already.  This is a country that has many people to make one people, e pluribus unum. There is no white indigenous people here, there are no black or latino, or asian indigenous people here.  No one has more rights than any other person, it's guaranteed by our constitution.  We are only fighting each other while all the politicians screw us over.  There will never be a good ending if WE don't ban together to make this country work, its call team work and its not impossible, it may take some effort on everyone's part, but it does work out in the end.  I promise...